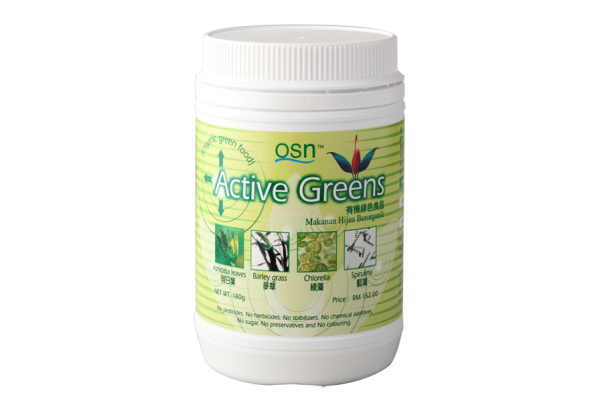 Take a look around you. Green is nature’s favorite and most dominant colour. Life on earth mainly depends on greens. The aquatic plants, terrestrial plants, and grasses that are densely spread across the globe have been the primary source of food for hundreds of thousands of years, providing energy and sustenance to all living creatures on earth.

Active Greens uses the richest greens grown in soil and also in freshwater and seawater to produce the healthiest combination. A total of 4 types of green plants can be found in OSN™ Active Greens:

Why are green foods important?

People nowadays build up a great deal of acidity in their bodies through eating too much meat, sweets and junk foods. That acidity leads to a wide variety of symptoms, including cardiovascular diseases and stomach discomfort.

These can easily be overcome by taking OSN™ Active Greens, which contains the finest combination of essential food elements for the complete nourishment of the human body. It has a definite alkalinizing effect on the body’s system, causing your pain to disappear as soon as the acidity neutralizes.

What are the benefits of OSN™ Active Greens?

The greens in our formula are grown or cultured organically and spray dried within a few seconds at low temperature to preserve its full nutritional value.

Learn more about the ingredients in OSN™ Active Greens

Ashitaba is called the “Plant of Longevity”. The Japanese, who are well-known for their longevity, consume raw Ashitaba as part of their daily diet to preserve their health. It is also considered the “King of Vegetables” in Japan for its high nutritional value.

Ashitaba has an excellent nutritional balance and provides one of the widest spectrums of naturally occurring nutrients from a single source. It contains vitamins, minerals, amino acids, vegetable fiber, chlorophyll and other phytonutrients including chalcone.

A thick, sticky yellow juice will flow out when cutting the stem and root of Ashitaba. This yellow juice is called chalcone and is rarely found anywhere else in the world. There are two kinds of chalcone conductors namely; ‘Xanthoangelol’ and ‘4-Hydroxyderricin’. These were discovered by Dr. Kimie Baba (MD, Osaka University of Pharmacy).

Chalcone is high in beta-carotene, vitamin A, C, E, calcium, protein, chlorophyll and vegetable fiber, making it superior than any other greenish-yellow vegetables. It also contains vitamin B12, which is normally found only in animals and not in plants.

The main functions of chalcone are:

Barley Grass contains amino acids, minerals, vitamins, EFAs, chlorophyll and multiple enzymes. The antioxidants found in barley grass include vitamin E succinate, superoxide dismutase (SOD), and 2″-0 glycosylisovitein (2″-0-GIV), which are all extremely aggressive free radical, scavenging and destroying substances. It has also been studied for its potential as a deodorizer and as a stimulant for tissue growth and production of red blood cells.

A key therapeutic action of barley grass is to prevent inflammation. In 1983, The Japanese Journal of Inflammation reported that Japanese scientists Matsuoka and Kubota had identified and isolated two special proteins in barley grass, naming them P4-D1 and D1-G1.

These proteins unleash a powerful anti-inflammatory effect when injected and are considered to be more powerful than traditional steroid treatments such as cortisone injections.

‘Chlor’ means green and ‘ella’ means small, and when combined, chlorella means ‘a small green food’. It has been nourishing aquatic life for millions of years, and is a nutritional giant filled with a vast array of health-promoting nutrients.

This freshwater algae has the highest source of chlorophyll in the Plant Kingdom with the most photosynthetic activity, generating the most oxygen among all plants. It is rich in protein, minerals, vitamins, fiber, enzymes, EFAs and high amounts of DNA and RNA nucleic acids.

Scientific studies show that nutrients in chlorella stimulate the immune system and exert cancer-protective action. Chlorella is a powerful internal cleanser. Recently, it was found that chlorella could reduce the accumulation of toxicity in the body.

It is also known to be an effective intestinal deodorizer, offering up its rich supply of chlorophyll to kill bacteria that produce unpleasant odor and gas.

Scientists believe that the tiny spirulina plant is close to a ‘perfect food’. It is rich in iron, antioxidants (including beta carotene, selenium, vit-E and super oxide dismutase [SOD]), vit-B12, essential fatty acid GLA, calcium and amino acids. It also contain other important substances such as chlorophyll, phycocyanin, bioflavonoids, RNA/DNA plus an array or ‘life force’ enzymes.